JOURNEY: Memoirs of an Air Force Chief of Staff

with Suzie Schwartz and Ron Levinson

A candid, uncensored account of General Schwartz's term as the wartime U.S. Air Force Chief of Staff under presidents Bush and Obama. 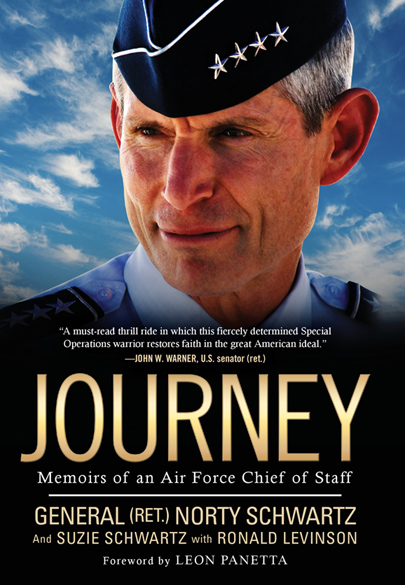 Journey is a book about leadership. It is packed with the general’s lessons from life in the military: breaking the mold, flying uncharted airspace, battles—from Iraq to the Pentagon, Afghanistan to Congress. It’s about pushing limits in an era of diminishing budgets and fewer resources to fuel the furnace of innovation. The general’s dysfunctional home life drove him to apply to the Air Force Academy over forty years ago, where he was provided with a new family and sense of worth he had never earned from his own father. He chronicles the phenomenal story of the evolution of the US special operations, such as what was achieved when taking down Bin Laden. The general discusses the controversial new technologies that have been allowing America to build new capabilities in remote aircraft and cyber warfare. Many believe General Schwartz’s greatest legacy will be the dramatic acceleration of the “drone” program. He is a staunch advocate for it and this book will explain why.

“General Norton Schwartz is an officer of impeccable integrity who met every challenge head-on with skill and good humor. His journey to four stars was marked by superior performance, while maintaining his humble and steady presence. He continues to serve our country and contribute greatly through his leadership of Business Executives for National Security.”

“There is no finer officer than Norty Schwartz, and no finer teammate for his journey than Suzie. Our time with them was our good fortune as we benefited first hand from their service and the lessons that they share on these pages.”

General Peter J. Schoomaker, USA (ret.), 5th Commander in Chief, U.S. Special Operations Command, and 35th Chief of Staff, Army“Norty and Suzie Schwartz together tell a unique story of a life together in the service of our country. When I picked Norty to succeed the Air Force chief of staff I had fired, I knew three things: General Schwartz could lead the Air Force through a tough time; he would face challenges as the first Chief who was not a fighter or bomber pilot; and he had a strong, forthright wife who would be instrumental in his success. This book is a love story―about the Air Force and about an extraordinary Air Force couple.”

Robert M. Gates, Secretary of Defense, 2006-2011
“More than a delightful memoir by one of the nation’s most notable military couples, Journey is a fulsome account of leadership and service at the highest levels. More than looking back and saying ‘thank you’ to mentors who encourage them, the Schwartzes’ candid personal insights into military life are paying it forward to future generations of military leaders.”

Michael Donley, former Secretary of the Air Force
“It is sometimes too easy to forget the human dimensions of major institutions and major forces. Norty and Suzie Schwartz’s warmly personal account reminds us that people―real people from the heartland of America―make all the difference in today’s world.”

Gen. Michael Hayden, USAF (ret.), former director of the CIA and NSA
“An extraordinary story and important history of a violent, tumultuous era told by one of the visionary warriors responsible for the rebirth of America’s Special Operations Forces. From aircraft cockpit to the halls of a wartime Pentagon, General Norty Schwartz was an inspirational leader who shaped history.”

Gen. Stanley McChrystal, USA (ret.), former commander of U.S. Forces in Afghanistan
“Suzie and Norty Schwartz have written a wonderful chronicle of a shared life of patriotism, service, and integrity. They have deftly combined personal vignettes with the broader sweep of the historical events they witness, participated in, and influenced. Readable and informative, I recommend it to students of military affairs, national security, and leadership.”

LtGen James Clapper, USAF (ret.), former U.S. Director of National Intelligence
“General Schwartz is the consummate, quiet professional. Revered by his subordinates and respected by both his peers and superiors, General Schwartz played an important part in the post-9/11 War on Terror. His leadership resulted in many of the military successes against Al Qaeda that the public rarely hears about, butsaved countless American lives.”

Frances Townsend, CNN contributor and former homeland security advisor
“Norty Schwartz is a fiercely determined leader who takes us on a thrill ride through his vital role in the evolution of our Special Operations forces and transition to the transformational RPA (remotely piloted aircraft) style of warfare. Journey is a MUST READ that restores faith in the great American ideal that through hard work, unselfish drive, and impeccable integrity, even those with the most modest beginnings can reach almost unimaginable heights.”

John W. Warner, U.S. Senator (ret.), and former chairman, Senate Armed Services Committee
“Every time I saw italics, I couldn’t help but smile and nod in agreement! Suzie Schwartz shared her unvarnished perspective of a military couple’s Journey―the uncertainty, unspoken (out-spoken!) fear, the constant need for flexibility and humor. We watch her grow from being Norty’s “plus-one” to being his anchor, his armor, his champion. And in doing so, she champions the struggles and devotion of all airmen and their families.”

Lynne Pace, spouse of General Peter Pace, USMC (ret.) and Ship Sponsor of USS America
“Through a lifetime of service, Norty Schwartz has had a profound and lasting impact on the Special Operations community, the U.S. Air Force, and our nation. This book is both a journey through, and a textbook on, leadership. It allows us to witness the development of a thoughtful, articulate leader. Norty shares the highlights of an amazing career, along with his foibles and missteps, and the lessons he learned along the way. I was fortunate to work with Norty, and appreciated firsthand his vision, compassion, and clarity of purpose revealed in the pages of this book.”

General Peter Pace, USMC (ret.), former Chairman of the Joint Chiefs of Staff
“Journey is an utterly gripping story about leadership and teamwork at the highest level and an analysis of the shifting nature of war. The story takes us from the general’s time as a cadet at the USAF Academy to achieving the rank of 4-star general and being pivotal in rewriting and implementing national and defense policy meeting the demands of the GWOT.”

Don D. Mann,
New York Times bestselling author of Inside SEAL Team SIX“Norty and Suzie Schwartz formed a magnificent leadership team for our Air Force men and women and their families during an exceptionally stressful time of war for our nation. They were dedicated to improving every aspect of our troops’ lives. No one worked harder and made more of a difference. Both continue to do so today.Read about a remarkable couple who dedicated their lives to serving America.”

Admiral Mike Mullen, USN (ret.), 17th Chairman, Joint Chiefs of Staff, and Deborah Mullen
“What a story of service, dedication, and selfless sacrifice by one of our nation’s most revered teams. While this amazing book has been completed, the awesome truth is that the story is not over, as their service to both our Airmen and our nation continues. Norty and Suzie Schwartz have given their everything to our Airmen and to the joint service team, and their tireless efforts have impacted so many. A ‘Chief’ of different roots, General Norty Schwartz led the Air Force in the toughest of times, and we are far better for it. Simply, these pages celebrate America’s very best.”